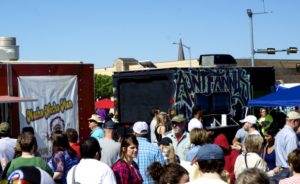 One of the things I really wanted to do on Saturday was take a minute to look around the food truck event at Heritage Square and appreciate the fact that we could hold something of the kind.

I honestly was looking forward to that possibility as soon as the weather forecast showed it was going to be a fine day. Although I didn’t taste as much food as I’d planned, there was a moment a little bit before noon when I looked around and realized the event had lived up to the highest of expecations for turnout.

The combination of a great idea on the part of the Greater Waco Chamber, beautiful weather and our city’s tendency to properly get out and enjoy a Saturday resulted in thousands at least passing through the Texas Food Truck Showdown.

Event organizer Ashley Futris from the GWC told me they sold 17,000 tickets and estimated more than 15,000 people showed up at Heritage Square sometime during the day. She also confirmed that they are planning a return of the event in 2016.

I think most of us took time to imagine what the event might look like next year. On that subject, I think everyone should back off playing the armchair QB. Frankly, if Waco hosted the Texas Food Truck Showdown for the next 10 years and it played out exactly like it did on Saturday every year, it would be nothing short of a decade-long success.

Having said that, it’s easy to guess that there might be more trucks, an earlier start and wider pre-event distritbution of Tasty Tickets in the future. However, the event hit the jackpot on weather and weather will be a huge factor each year.

As far as our participating, we had fun chatting with everyone who stopped by our table. We definitely have some ideas on how to attack it next year too.

One more bite: If you haven’t seen our slideshow, check it out here, and if you’re wondering who won, we listed that here.