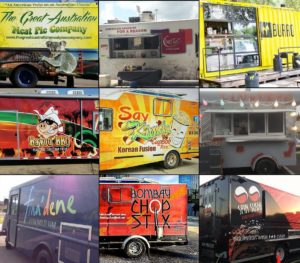 Nearly three dozen food trucks converge on Waco’s Heritage Square this weekend with some dishes that many Waco foodies may encounter for the first time.

How about a burger with doughnuts as buns? A deep-fried, bacon-wrapped hot dog topped with chili? Indo-Chinese and Guam specialties? Korean eel sauce? The less-adventurous shouldn’t worry: There’s plenty of burgers, tacos, pizza, sandwiches, salads and more, too.

They all come together in Saturday’s Texas Food Truck Showdown and Sunset Cinema where 35 trucks — eight from Waco and the rest from across the state, including a 2011 winner of the Food Network’s “The Great Food Truck Race” — face off for a $2,500 grand prize.

It’s more than food. There will be book signings by celebrity chefs and food truck writers, live music from noon to 3 p.m., a beer and wine garden, some 11 mobile vendors (think food trucks, but selling things other than food) and a free, outdoor screening of the 1994 film “The Little Rascals.” Organizers expect a crowd of 2,000 to 5,000 people for the first-time event.

Cities such as Austin, Dallas and Houston have food truck festivals, but not many competitions, so the two decided hosting a contest would draw attention to a Waco event. It also didn’t hurt that Waco is centrally located, although not close enough for some possible competitors, she added. “One told us they didn’t think their truck could make the trip,” she said.

While the concept of food trucks may have a higher profile in Waco and national pop culture — the Food Network’s “Great Food Truck Race” and the 2014 indie film “Chef” come to mind — they’ve been around for decades, Austin food truck writer/guru Tiffany Harelik said. 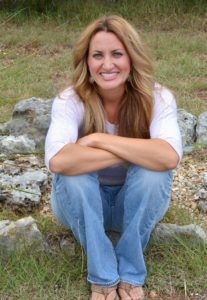 “It’s not a new food pop culture. There’s street food in every culture,” she said.

That makes the idea more than a fad. “As long as we have streets and communities, we’ll have street food,” she said.

That said, the cultural mix, economies and histories that make communities distinctive also make their food truck cultures distinctive. Harelik started writing about food trucks in 2009 and now has several books to her credit: a seven-volume “Trailer Food Diaries” series that looks at food trucks in Austin, Dallas, Houston and Portland, Oregon, with recipes from those trucks; “The Big Bend Cookbook”; and a “Girls Guide” young adult series. She also helped organize Austin’s Trailer Food Tuesdays.

Why the current popularity? “I think part of the appeal is that you get to meet the person who cooks for you, takes your order and is cleaning the dishes,” she said. “A lot of times it’s the person you’re engaged with on Facebook or Twitter.”

Food trucks also offer an excuse to get out of the office, the car or the home with a more satisfying experience than a fast-food restaurant’s drive-thru lane, she added.

Given her knowledge and love of the subject, has she ever operated a food truck or wanted to? “Absolutely not,” she laughed. “It’s hard work and only a few make it to the top. Your profit is dependent on the weather and other things that you can’t control. My passion is writing.”

They’ll sample and choose from entries prepared by about 35 food trucks from across the state, representing not only a variety of cuisines, but fusions of those cuisines: tacos with Asian-styled fillings, Indian dishes with a Chinese twist, novel sweet-savory pairings like burgers with peanut butter or strawberry jam, grilled lamb or goat with curry or chimichango sauces.

The grand-prize winner drives off with $2,500, but there are also $500 awards for best dessert, best between-bread (think sandwiches, tacos and the like) best barbecue, best international and most creative truck design.

Celebrity judges will sample and judge between 10 and 11 a.m. with public tasting/judging (for People’s Choice) from 11 a.m. to 3 p.m.

A $3 Tasty Ticket is good for an approximately 4-ounce sample of any dish up for competition, with $1 from each ticket helping defray Showdown costs and the remaining $2 going to the truck.

Bands performing during that period include Twelve 12 at noon, Katie Stewart at 1 p.m. and Giblet Head at 2 p.m. Harelik will sign copies of her books, and mobile vendors will offer shopping. There will be a beer and wine garden operating during the day and live broadcasts by local media KWTX-TV and iHeartMedia radio stations.

The food trucks will reopen with their full menus at 5 p.m., offering more than the food items put up for judging. “Little Rascals” will be shown on an inflatable screen at Heritage Park shortly after sundown, and Futris suggested that those attending may want to bring lawn chairs for seating. No coolers will be allowed for the event, however, and pets must be on a leash.